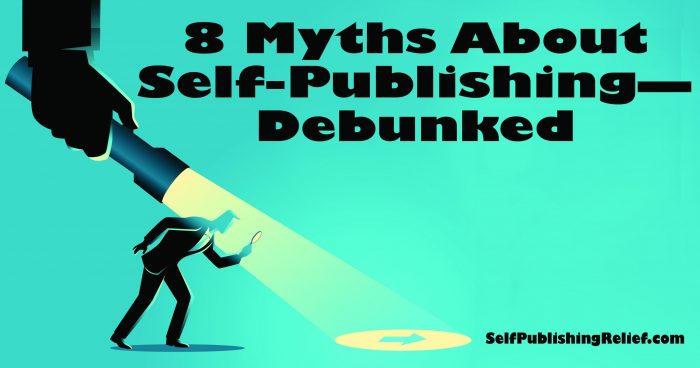 The Most Common Myths About Self-Publishing

There’s a stubborn perception that a book is only “really” published if it appears on a bookstore shelf. Traditional publishers locked down that access long ago, when it was the only way to put books before the buying public.

But with the number of major bookstore chains shrinking (anyone remember Borders or Waldenbooks?), this marker of publishing success has become an old-school remnant of the pre-digital era. Amazon transformed the industry when it burst onto the scene in 1994.

Today, Amazon has the lion’s share of eBook sales in the U.S. But Amazon also sells about 50% of all print books too. Self-published authors have easy access to this major retailer, which evens the playing field and makes self-publishing a viable—and legitimate—option.

Before the self-publishing revolution, authors who found themselves unable to secure a traditional publishing contract would sometimes resort to vanity publishing. Vanity publishers produced a small volume of print books at a high cost to the author. The authors were then responsible for selling those books on their own.

Although self-published authors do have to pay for certain services out-of-pocket, such as cover design, editing, and formatting, indie authors don’t have to sell books out of their garages. Today, with print-on-demand self-publishing, there’s no need to buy and store your books yourself. And authors now have easy access to some of the largest online eBook vendors in the world, including Apple Books, Google Play, Kobo, and Barnes & Noble/Nook.

If you can’t get your book published by a traditional publisher…does that mean it’s terrible? Nothing could be further from the truth.

Traditional publishers are in the business of making money. Editors are always in search of books that will fill the niches that they’ve already worked hard to create and market. A writer will have an easier time selling a book in a popular niche than one whose popularity has waned.

If you’ve written a terrific Gothic Mystery, but the readership is small, a traditional publisher will pass. A self-published author can dig in and find his readership through social media and category and keyword techniques. Since indie authors receive 70% royalties, they can make a profit where a traditional publisher, with high overhead, can’t.

You don’t have to pay thousands of dollars for covers and formatting to self-publish your book. There are plenty of high-quality cover designers who’ll provide professional-looking predesigned covers that can be modified for a few hundred dollars. (Check out the premium predesigned covers from Self-Publishing Relief here!) And tech-savvy writers can format their manuscripts using Vellum or Calibre or Scrivener.

Editing can be the largest production expense, especially when you’re first learning the craft. You may be able to mitigate a portion of this expense by using beta readers, pairing up with another writer, or setting up a critique group.

When it comes to marketing, how much you spend is up to you. Social media, however, makes spreading the news about your self-published book free and easy.

Self-Publishing Will Never Make You Money

Self-Publishing Will Ruin Your Chances Of Being Traditionally Published

And many genre authors write faster than traditional publishers can publish them, so many have self-publishing ventures on the side. These hybrid authors take advantage of the best of both worlds. You don’t have to choose between traditional and self-publishing—you can do both at the same time!

Yes, successful self-published writers do devote a larger portion of their days to marketing strategies than most traditionally published authors.

New or mid-list authors dreaming of book tours and TV appearances should temper their expectations. Publishing houses have pared back considerably on those old-school perks. These days, traditional publishers expect you to have, or to develop, a social media presence. Unless you’re the beneficiary of a six-figure contract, it’ll be up to you to market your book to readers after the launch…just like self-published authors.

It is true that not every self-published writer will make the best business decisions. However, these writers will pay a long-term price for bad covers, grammatical mistakes, misspellings, etc., in terms of negative reviews and low-to-no sales.

Done right, the formatting and graphic design for self-publishing can be so advanced and professional that the only way you can tell how the book was published is by checking the copyright page. And if you use your own ISBN, even the copyright might not readily identify your book as self-published.

Deciding between traditional publishing and self-publishing is a personal choice. There are benefits and drawbacks to each option. Keep these debunked myths about self-publishing in mind, and make your decision armed with the right information—free of stigma, myths, and misinformation.

Question: What self-publishing industry myths have you heard?