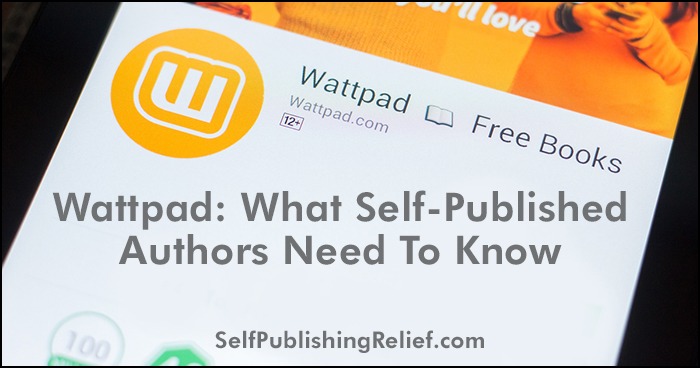 Launched in 2006, Wattpad is a free online publishing platform with over 70 million writers and readers. Authors of every possible genre have been flocking to Wattpad to discover, cultivate, and build a community of their own unique readers by instantly publishing work on this social media site. Most recently, Wattpad has caught the attention of HarperCollins Publishers, Macmillan Publishers, Paramount Pictures, and NBC, among others.

Sounds great, right? But is it right for you? Self-Publishing Relief wants you to know the pros and cons so you can decide for yourself if Wattpad is the best way for you to build your fan base. Here’s what self-published authors need to know about using Wattpad.

Is Self-Publishing On Wattpad Right For You?

Whether you’re a writer who’s just starting out or a seasoned veteran, publishing a story on Wattpad will bring your work to a new, receptive audience. Being able to promote your work directly to potential readers can be an invaluable tool for any author. And like any other social media platform (Twitter, Facebook, Instagram, Tumblr, etc.), Wattpad is free to use.

And yes, the rumors are true: Some authors have achieved amazing success by publishing on Wattpad. For instance, Anna Todd’s Wattpad novel, After, reached over 1.5 billion reads on the platform—then went on to become a New York Times Bestseller and score a movie deal with Paramount Pictures. Todd’s is only one of the many success stories that began on Wattpad before being scooped up by traditional publishing.

For new writers, uploading a vignette, short story, novella, poetry book, or novel on Wattpad will allow you to present your work to a large community of readers, which can be a good way to get feedback.

Writers with publication credits and an established following can use Wattpad as a way to give their readers immediate access to their latest work.

While there’s a great variety of genres on the platform, writers of science fiction and fantasy will definitely find an avid, interested community of readers looking for the next Kurt Vonnegut or Isaac Asimov. And Young Adult is also a very popular genre on Wattpad.

Why you might want to avoid publishing on Wattpad

While Wattpad has definite benefits, there are some things to keep in mind before you eagerly rush to open an account. The most important point: Any work uploaded onto Wattpad would be considered published. If you think you might want to submit your stories, essays, or poems to journal editors, most are not interested in receiving previously published work—so your Wattpad publications would not be eligible for publication in literary journals.

And remember, Wattpad is a social media platform, so once your writing starts to get attention—that attention may not necessarily be all nice and constructive. Honest feedback can be helpful, but be aware that some readers will look for any reason to criticize your work.

It’s also expected that you will actively engage with your readers. You can’t just plop your book or story on Wattpad and then sit back and assume readers will come rolling in. If someone leaves a comment, you should respond as soon as possible. If you’re not a fan of interacting on social media, Wattpad may not be for you.

And while some authors on Wattpad do get picked up by traditional publishers and have their books optioned for movies and television—not all do. If you are considering publishing a book on Wattpad, you must be prepared to give your book away for free.

For new writers and published authors, Wattpad is a unique way to reach a new audience. Just keep in mind that the work will be considered published by literary journal editors, and that you’ll essentially be self-publishing your work and offering it for free to readers.

Question: Have you tried Wattpad? What are your thoughts about the platform?