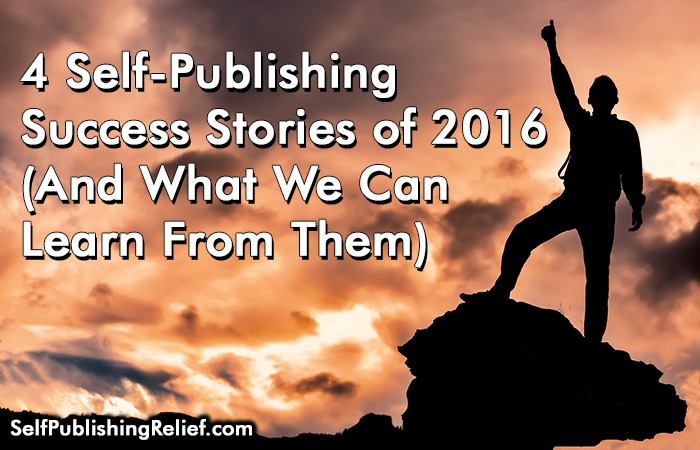 2016 was a strong year for self-published books! By thinking outside the box and trying new ways to reach their audiences, these authors boosted their book sales and wrote their own success stories. Here are some great lessons from last year’s self-publishing best sellers to help you reach your publishing goals in 2017.

Her Last Tomorrow by Adam Croft

What Happened: Adam Croft wasn’t expecting much when he self-published his ninth book, Her Last Tomorrow. Little did he know that it would become arguably the biggest self-publishing sensation of 2016. So far, it has sold over 500,000 copies worldwide—mainly through Kindle sales. The book has been so successful that Amazon’s imprint Thomas and Mercer signed a deal for the worldwide paperback, digital, and audio rights. Croft has already received film and television offers for the book, and has earned enough money from the book to pay off his mortgage at age twenty-nine.

What We Can Learn: Sometimes, the best sellers aren’t necessarily in print. Croft has made hundreds of thousands of dollars from Kindle sales of Her Last Tomorrow. And his marketing secret? Heavy Facebook advertising. Learn some tips about how to advertise your self-published book on social media.

The Thief Who Pulled On Trouble’s Braids by Michael McClung

What Happened: Michael McClung’s The Thief Who Pulled On Trouble’s Braids has been called one of the best indie fantasy novels of the year. The first book in the Amra Thetys series, the book won Mark Lawrence’s Self-Published Fantasy Blog Off Contest out of 270 entrants and has recently been picked up by Ragnarok Publications. It also received strong reviews, with a four-and-a-half-star rating on Amazon.com, and Internet reviewers calling it “a clever, high-energy book.”

What We Can Learn: The success of McClung’s book can be chalked up to submitting to a contest. One of the best ways to garner attention for your book is to submit it to contests and win. Check out the Writer’s Relief Classifieds to find the best, most up-to-date, easiest-to-search listing of writing contests available.

What Happened: Prolific Atlanta author Stephanie Bond started self-publishing in 2011 and has since sold over 2 million copies of her books. However, she wanted to experiment with the serial format. This came in the form of Coma Girl, which started in daily installments on July 1, 2016 and concluded on December 31, 2016. Bond released each month’s serials in book and Kindle format, so her readers had the option of binge-reading or reading each chapter one by one. Its online presence inspired the Twitter hashtag #ComaGirl, and has a dedicated following of readers.

What We Can Learn: In order to gain followers and fans, you must be consistent with your social media postings. Bond’s out-of-the-box idea, to publish Coma Girl as a serial, was largely successful due to her regularly posting excerpts from the story. By taking the time out every day to add to Coma Girl, Bond both entices readers to follow her story and gains their trust. This is the same effective strategy used by many successful bloggers and social media stars.

What Happened: Author Eva Lesko Natiello never planned to write a book. But while living as a stay-at-home mom, she turned to writing as a hobby. When she read an article about people who Google themselves and discover life-changing facts about their lives online, she wrote The Memory Box. Self-published in 2014, the book sold so well this past summer that it wound up on the USA Today and NY Times Best-seller Lists, temporarily beating out arguably the year’s biggest seller, The Girl On The Train.

What We Can Learn: Sometimes, inspiration can come from the unlikeliest places and in the unlikeliest genres. Although she wrote a popular thriller, Natiello insists that she’s too scared to regularly read thrillers. But by writing outside of her comfort zone, Natiello wrote a best-selling book that has put her name on the contemporary literary map.

Clearly, there is no one path to success in self-publishing. While some writers tried something new and different, others simply wrote a strong story that resonated with many readers. The most important action any writer can take is to not give up. You never know—with the right combination of story, writing skill, and promotional savvy, your book may be a best seller in 2017. And if the idea of navigating the self-publishing process alone seems daunting, Self-Publishing Relief is ready to guide you through every step of the process and assist with your marketing efforts.

QUESTION: What was your favorite self-published book of 2016?

← Does Your Self-Published Print Book Make A Good First Impression? How To Be A Better Panelist When Promoting Your Book →